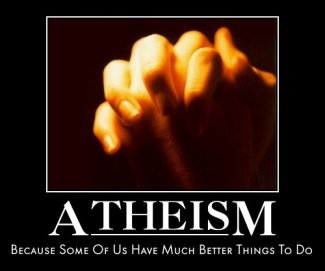 It has begun! I have considered my options and, well, decided that it is time to join the ranks of atheist team. #TeamAtheist. It was imminent since it just seems more practical and also makes me warm inside to believe that I control my fate and not some tyrannical being in the air. Albeit, it is true that I have physically experienced spiritual warfare, seen numerous extraordinary answered prayers, been an eyewitness to an injured foot being miraculously healed, and heard of many other stories that confirm there is a true God…I just really believe that I know more “real” knowledge and will not subject myself to silly myths anymore.

Now I can already sense what you Christians are getting all riled up. Just calm down, you can join me on this adventurous bandwagon of Real Truth. There is room. I’ll do us all a favor and give you point-by- point reasons to why atheism is better than your mythical faith. I will address it as if I am being debated by a Christian with a few of their best reasons that prove Christianity is real, and I’ll combat it with my wit and intelligence. Because even though God is forever in age, I still know a thing or two in my own youth. I have a college degree and the Internet at my disposal.

-I will answer to you that you are correct. But there is an American scholar who claims to have recently found ancient evidence that proves that Jesus was made up. I’ll admit that he’s probably very biased and, to the contrary, has likely found nothing to negate 2000 years of your historical evidence. However, he gives me hope. #TeamAtheist

-I will answer: Of course I believe Caesar, Socrates, and Aristotle were real people. I’d be foolish to believe otherwise. Still I do not believe Jesus was real. I need more proof.

-I do not know. But cosmic evolution is still possible. We just need further technological advances to get there. #Atheist4Life

-Ahh, you see those ex-skeptics were weak. C.S. Lewis was weak. I am much more competitive and will not allow myself to fall into the subversive hands of Christianity. I will train myself to have a closed mind and, in turn, eventually work my way up to allow a hardening of my mind to any concept of faith. The wonderful part of that is that as I further train myself, the more biased truth I will psychologically believe. It will get to the point that I will fully believe in any atheistic principal or finding regardless of any evidential merit. 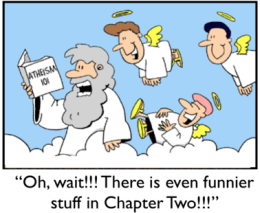 Ok, if you have not guessed it yet, this is all satire. However, I have much more on my chest that has to be released to the atheist community.

I am constantly fearful of you all. This particular blog post is infinitely miniscule to the amount of information out there that points to the validity of scripture and of a triune God. On the other hand, there is also information out there that can lead you to believe the contrary. How else would the “hardening of the heart” be achieved, as in Romans 1:28 and Exodus 9:12. How else would Satan and his powers of darkness put in their two cents to skew the legitimacy of the Gospel, as foretold in Ephesians 6:12 and Revelation 12:9. Be careful intelligent ones. Lawyers, doctors, businesswoman, professors… lest you begin to believe in your own finite abilities. Be careful liberal youth, artists and freethinkers… lest you slip into a culture that deems God as controlling and fake. Our society heightens the beliefs of the 17th century Age of the Enlightenment past its initial purposes. We love ourselves so much that we become territorial animals against anything that will rail against that love for ourselves (i.e. God). Many times I get headaches with the weak arguments brought up by atheists. NONE of which a strong enough to ever stomp Christianity. It takes more faith to believe what you believe.

You can never know it all because mystery is a prerequisite for faith; and without faith it is impossible to please God. Hebrews 11. There will never be enough false information created or debates that will eliminate our faith. Christianity is booming in China, Africa, Korea, etc. Do not be deceived by what you may see in your few seconds here on earth, or on your small radii of where you live. There are things at hand of which you cannot see. God’s kingdom will steadily build. Proof of his reality will steadily be seen (Romans 1:20). Luckily for us all, God in his infinitely loving grace is welcoming you and I to join Him. He loved us enough to die – even for those that do not believe. If you have a tingling desire of that invitation, then seek it out. Seek the truth. It is eternally worth it.

There was an error retrieving images from Instagram. An attempt will be remade in a few minutes.

Error: Twitter did not respond. Please wait a few minutes and refresh this page.