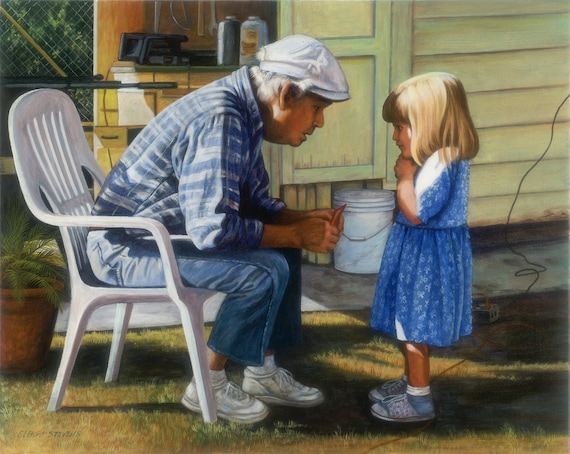 With arthritis-ridden knees and a cancer-stricken body, the older gentleman laid there in his hospital bed. Being in his last stage of life, Brian’s body was barely functional and his lowly speech was almost undetectable. Neither was his vision as clear as it once had been. Nevertheless, through all the chemotherapy he was blessed to still have a sharp brain in his last few days of life. This came in handy, as the only two things he had left in his life were his relationship with Christ and family.

Brian’s granddaughter, Alex, walks into the hospital room. They say it is not right to have “favorites” amongst family members – however, the old man adored Alex. Not only was she his favorite but she also was following in his footsteps by attending his college Alma mater, Clemson University. She was entering into her junior year majoring in history and sociology. She’d visit him regularly during his early stages of cancer. A hint of jealousy would sometimes flow through his veins as he noticed the energetically familiar gleam in his granddaughter’s eyes as he listened to her tell stories of her adventures in Clemson.

Today is different. She is different. Brian noticed, through his blurry vision, an unfamiliar facial expression on Alex’s face as she walked in. Her footsteps slow and purposeful. Her posture tense. She avoided eye contact. “Oh gosh, this can’t be good” Brian joked aloud in a whisper, attempting to put a smile on Alex’s face.

“Morning, Grandpa,” Alex began, “you’re probably wondering why I haven’t visited you in a while. I’ve been wanting to ask you something about your past.”

Those words naturally developed nervousness in the elderly gentleman. He immediately began thinking of every wrong he may have done in the past. “Go ahead Sweetheart,” Brian managed to reply in a soft voice.

Alex continued, “As I’ve gotten deeper into history courses I’ve noticed some things that worry me. We’ve studied the horrific atrocities of the Holocaust and how people stood around and did nothing. We’ve studied the amazing neglect of the treatment of blacks before and during the Civil Rights Movement. In your time, abortion was a hot, problematic issue. It was a brutal, disgusting ordeal. The sophistication of science grew during your time to undoubtedly prove that you were taking lives.”

Alex paused for a few seconds in order to regain emotional composure. She glanced away, nervously avoiding eye contact, and then continued, “The death toll of Joseph Stalin’s regime was 40 million. Hitler’s was 30 million. From 1973-2015 alone, America murdered 56 million babies. What on earth were you all thinking and what did you do to try to stop it?”

Silence ensued. Memories of Netflix marathons, Super Bowl parties, YouTube videos, innumerable hours at the gym, and girls flooded the old man’s mind as the remembered the things he focused on during that time period.

He sluggishly responded, “But … back then … science was cloudy on that topic. With limited technology anyone was able to back either side with science. “ Brian hoped that answer would be sufficient and she’d move on.

“What about the fact that the Bible already gave you the truth?” Asked Alex.

“Sweetheart…” the old man pleaded; as to again insinuate the desire for a topic change.

Noticeably unsatisfied with that response, Alex leaned further into his bedside. She looked into Brian’s eyes as if she was begging to hear something more satisfactory. “Grandpa, please tell me I’m wrong. See, it seems that you and America were just as apathetic and indifferent on abortion as Hitler was with the killing of Jews. As if you were killing babies and loving it. What is worse is that the babies had no chance of even defending themselves. Did you at least stay up at night worrying about the large number of children that died in the womb that day? Most of the abortions had nothing to do with difficult circumstances but rather a means of convenience.”

Finally calming down, Alex’s speaking pace slowed, “Sorry … for randomly throwing all this at you. It’s just frustrating … to know all the horrendous things that happened during your time, namely to unborn children, and knowing that you were there. That you claimed to love Jesus. To love people. But you sat idle, as millions upon millions of helpless lives were loss. It is embarrassing to know that my grandfather was a part of that generation and did not stand up for the murder of babies.”

Vexed with shame, the old man laid still in his bed. The pain of his granddaughter’s disgust outweighed the physical pain of his cancer. Expectantly, his heart could take no more. His heartbeat grew uncontrollably fast into a cardiac arrest. Alex yelled for a doctor. Tears feared her eyes.

Suddenly, Brian awoke from his deep sleep. He was young again, sitting on the couch with his laptop in his lap. He realized it was all a dream. He glanced at his laptop to see an internet article on abortion. Presumably, he concluded that the article must have put that nightmarish dream in his mind when he read it before his nap.

Brian turns on the television. “Ha, weird dream there”, he thinks to himself. “At least I got a good nap out of it.” He opens Netflix. “Now it’s time to continue Season 5 of Friends. Ross just found out that Chandler and Monica are dating now!”

The hand of an 8-week old. Aborted after 8 weeks.